The starting point for knowledge-building in Knowledge Forum is a view. Figure 4.1 shows a view co-constructed by a Grade 1 teacher, her students, and a teacher-researcher to launch a year-long study of the topics that provincial guidelines specified for Grade 1 science. A view may contain notes or pointers to other views. 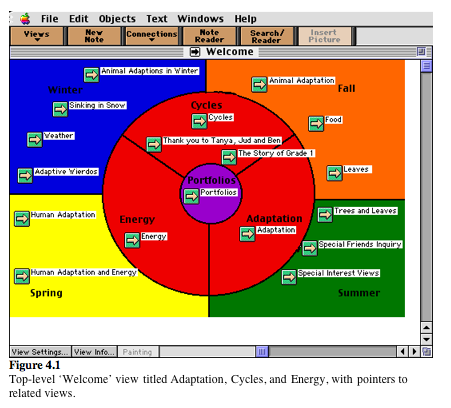 In this case, as a top-level organizer, the view contains only pointers to other views. 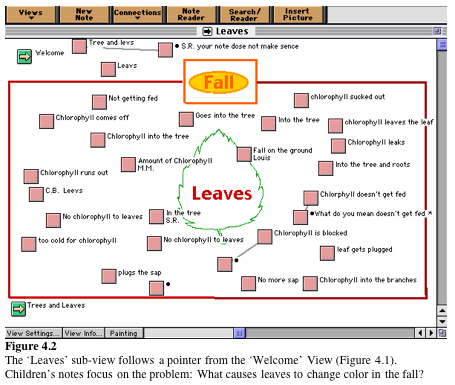 In figure 4.2, we follow one of these pointers, the one in the Fall view that points to work on leaves. Here there are a number of notes authored by the children. As the note titles indicate, they do not contain miscellaneous information about leaves but instead focus on a problem that the students themselves had come up with (real ideas, authentic problems): What causes leaves to change color in the fall? 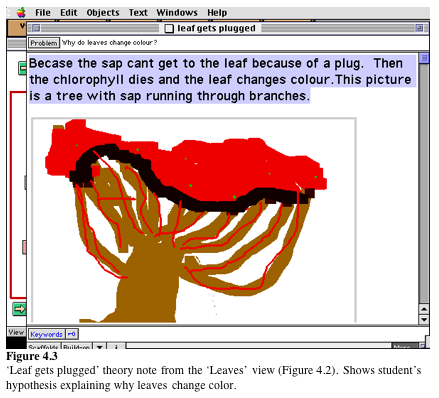 Figure 4.3 shows one of the notes, which hypothesizes that plugs develop that prevent sap from getting to the leaves, causing the chlorophyll to die. Some other theories, illustrating the principle of idea diversity, are

“Fall-I think the chlorophyll goes into the tree to keep warm for the winter.”

“I think leaves change color because when the leaf falls down I think that the chlorophyll goes to the outside of the leaf so it leaks off the leaf.”

“Because it’s too cold for the chlorophyll to make food for the tree.”

What we cannot see here, but what the teacher reports in the virtual tour of her knowledge base, is an account of a field trip the students took to a maple-tree farm to see how maple syrup is made. One child, watching the sap flow from the tree, noted that her theory regarding chlorophyll must be wrong, because the sap that she saw was not green. Others raised many other issues about what they saw, and how the flow of sap gave them new ideas about the internal structure of a tree, and the relation of its internal structure to their theories. What was impressive, as the teacher reports, is that the work in Knowledge Forum and the visit to the maple-syrup farm were not closely related in time. She was surprised and delighted that a relationship was discovered, as she had not anticipated it herself. This juxtaposition of theory and relevant evidence suggests epistemic agency: Personally held beliefs are viewed in relation to ideas suggested by others and by everyday phenomena. We also know, from the teacher’s account, that the students became actively engaged in other efforts to test their theories, through self-invented experiments. For instance, they collected leaves and placed them in the freezer in the basement of the school. This was their way of testing the time and degree of color change they might see with the leaves. As the above accounts suggest, their theories seemed real enough to them that they carried them to the playground, took them along with them to the field trip, and reportedly to the dinner table. The transportability of these ideas, I propose, follows from their articulation and availability in a communal space where they became an object for inquiry by everyone.

We see evidence of the extended life of these ideas in a subsequent view (Figure 4.4). This view contains several notes of a special kind called ‘rise-above’ notes. These notes are the result of the students and teacher working together to collect into one common note similar theoretical accounts. One rise-above note reads, “These notes share the idea that the sap gets plugged and that is why the leaves change color.” Students who felt that accurately characterized their theory then dragged and dropped their notes into the rise-above note, removing them from the screen but making them still available through the rise-above. Thus we see the rise-above principle in action. As suggested by the various text and graphics notes that the students wrote, there was a way in for everyone—a common discourse space to aid the democratization of knowledge. 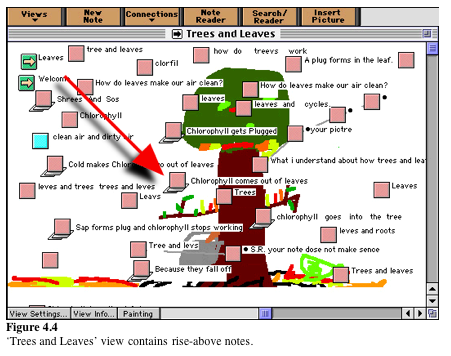 Pervasive knowledge building is reflected in the extensibility of their work with ideas in many contexts, both in school and out, and across diverse knowledge media. Community knowledge, collective responsibility is evident in their work with one another. Symmetric knowledge advancement is suggested by the teacher’s report that she gained a deeper understanding of photosynthesis and of why plants turn different colors in the fall through her involvement in the students’ inquiries.

This example is part of the following book chapter: